Now THAT is a Prawn Cocktail Samantha sent in another photo film to In Focus 2006, "a national photo exhibition showing life through the eyes of young people with epilepsy". The idea is that entrants are given a disposable camera to take photos to show they lead the same sort of life as those without epilepsy. Last year Samantha's photo was of her standing cool at the bottom of Bracknell's ski slope. This year Samantha sent in a number from a teenage youth club that she attends. Sadly no people feature in the photo they chose: The Essence is "a fun game", according to Samantha. I can't find anything on the Internet about it but apparently it's a sex education product...

Nothing to see, move along...

After attending the inaugural meeting at the local bar of the Blogger's club, Eileen Brown's idea, I was so enthused that I signed up to MSDN Blogs myself to teach the world about MSMQ! Right, got the title of the blog done and now ... bugger. How do I start? Which aspects of this wondrous product would do to kick off the blog? More importantly, which aspects do I actually know enough about to make them interesting? Should I not worry that there is a tonne of information out there already on technical websites and in newsgroups that makes anything I say redundant anyway? What about Yoel's blog which has 10 years of MSMQ dev team experience behind it? Well, it's a challenge to move away from the protection of my desk in PSS and expose what I have to say on MSMQ to the Internet and hopefully a challenge worth taking.

Where we live you don't normally see the moon come up. None of the windows are east facing so when you see the moon, it's already well up in the sky. Therefore it was lovely to be at an outdoor party on the side of a valley as the moon crested the opposite side. As we watched, we marvelled at the speed of the moon and it took only a few moments for the whole face to be free of the horizon. By coincidence, there are exactly 60 seconds between first and last images. I suppose no-one ever thought he was going to die of old age but it still comes as surprise to hear that Steve Irwin was killed today by a stingray. I feel sorry for the young family he left behind - must have been like being married to a policeman or soldier where you're always wondering when the phone will ring with bad news.
I'll certainly miss the crazy bastard. As his answering machine at his zoo reminded callers: "Remember, they rule."

Made us laugh anyway. 
Pressgang take on the Bunkfest 
Street legal? They having a laugh?

I was impressed to find out that these steam engines are "street legal" and so have tax disks, number plates and 3rd party insurance (£500 excess). 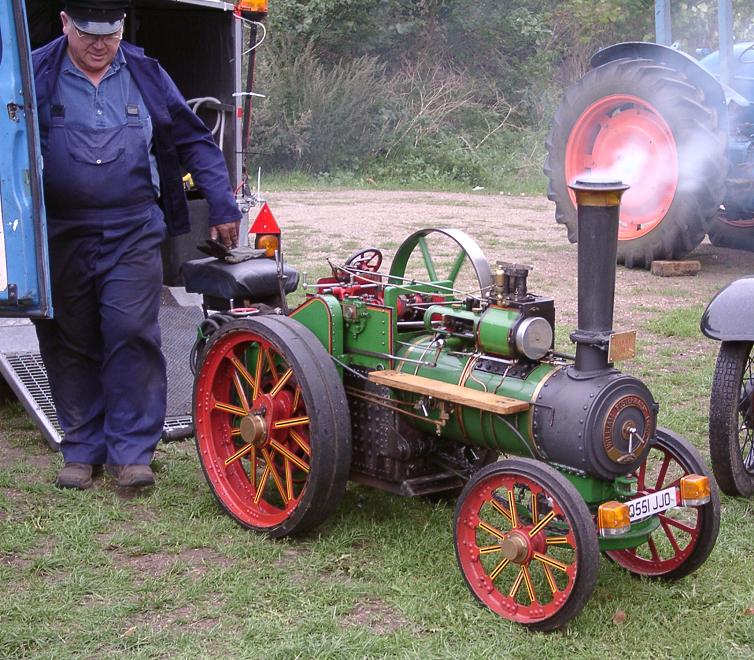 
The Bunk of the Fest

As it was the Bunkfest, we'd planned to go on the Bunk - the engine on the Cholsey and Wallingford Railway - but the timetable meant we had to leave Sarah Griffin's set early.

Now I've had a chance to look at the map, I see that the private railway line is only 2 miles long which is quite surprising as the journey seemed to go on for a while. On reflection, we must have been moving pretty slowly but when you've travelled on the public railways, moving at all can sometimes be a luxury.

The dedication of the railway fans to keep the railway going was plain to see. Although the coaches could do with some repair, you could imagine how expensive it would be to overhaul one when you don't really have a regular revenue stream. We helped them out through ticket sales and I treated myself to a pint from the bar - the bar being some tables in the type of old coach that had a large area/cage for bikes, luggage, parcels, etc. It was quite weird to see such a coach which had been replaced so many years ago with seats-only coaches. They were selling bone china mugs to collectors too so that made my pint £6.50! A mug in more ways than one :-) There was supposed to be a live band on the train but on the outward-bound trip we were in the wrong end of the train and the musicians weren't strolling from their end. So on the return we sat down that end and had some background music to our view of the countryside. I did take some photos as we went but the windows were pretty grubby so none of them were really great. For examples, here is the Cholsey Parish Church where the author Agatha Christie is buried: Having missed Sarah on the boat trip, we did catch up with her at the Coachmakers Arms although we first had to sit through trad folk duo Dave Bennett and Brenda Hart. The day before we had downloaded some tracks from her website and decided she was definitely worth watching. Some good covers that we all recognised - especially Samantha - and Sarah was quite amusing in between tracks. Worth looking out for again. As Pressgang groupies, we were looking forward to Bunkfest 2006. Just like last year, the band were playing on one of the free stages in the Kinecroft at Wallingford, a long narrow grassy park where all the market stalls set up around the outside along with the all-important beer tent.
From the website we checked out all the bands in advance, quite unlike what we normally do. Sue craves spontaneity but I desire to know what I'm going to do - I hate having the "what shall we do next?" conversations when nobody knows what's on offer and if they're any good. So this year we had a plan which didn't go too badly in the end although we did try to self-destruct before we started.
First stop was supposed to be one of the boat trips where different musicians played on each journey. We were running a bit late and walked to the river where we were unable to find the point the boat was supposed to leave from. With the schedule starting to fray, we walked into Wallingford and tried to find somewhere for lunch. The tension got too much and after a quick argument we threw away the script and split up to go our separate ways.
Luckily, after a while we bumped into each other and tempers had cooled down so that we could become a family out to enjoy ourselves again.